God told Moses, “The fire must be kept burning on the altar continually” (Lev. 6:13), but when the lamb ceased to be placed on the altar, the fire burned out. In the same way, when the Lamb is not central in the Church, the fire begins to smoke and eventually burn out.

283 page book with a powerful sermon by Jonathan Edwards on “Christ’s Agony” in the Appendix. This is the sermon that changed Dr. Sandy’s life.

The Unquenchable Flame challenges the Church to bring back the central message of the Cross until the fires of revival sweep across this land. In this day when revivals suddenly blaze and then slowly begin to smolder and die, where are the prophets like John the Baptist who will cry, “Behold the Lamb of God?” until we are “baptized in the Holy Spirit and FIRE” (Jn 1:29; Lk 3:16)? Where are those like the Apostle Paul who will “resolve to know nothing except Jesus Christ and him crucified” (1 Cor 2:2) and will set the world ablaze for Christ? Where are the Apostle Peters who will brandish the sword—the Apostolic message of the Cross—until people are “cut to the heart” (Acts 2:34-35)? Where are those like John who will look into heaven until they behold the Lamb of God, then bring that vision down to earth?

Terry Keith (Amazon Review): “For years intercessors have cried for revival in America, in our churches, and especially in our personal lives. Finally this book answers the question: Why no revival? We have had so-called revivals, and they have left us stuffed with fluff and overdosed on Christian sugar. The need is not to look to personalities or the next spiritual high, we have to go low. We have to look into the cup of judgment which Jesus drank for us on the cross. Nobody really wants to see it, but we must do so in order to fulfill the Great Commission. This book brings us back to the cross; back to the suffering of Christ; back to why we are called Christians.”

Dottie Miley (Amazon Review): “Great book about how God wants revival to come to the church and stay. Revival will start when we go back to the cross. The message of the cross is the power of God. God is a consuming fire and he wants His flame to burn within us all the time. Revival will usher in the Kingdom of Heaven on earth.”

Mark Kuntz (Healing Rooms minister and pastor with Patricia King): “When I read The Unquenchable Flame, my wife and I took our possessions, left our ministry headquarters and drove all the way to Alabama just to get more of this message. It completely changed our lives. Now when we minister, we preach with the fire of the cross and we see many more people healed.”

Chapter 6: Jesus Sees the Cup To understand the agony of the Father’s Cup, picture again the scene as Jesus writhes beneath the gnarled olive branches in Gethsemane. In a garden Adam hid from God and was cursed to toil by the sweat of his brow. Now, in another garden, the Second Adam toils in prayer by the sweat of His brow. But this is not merely a watery sweat; blood seeps from the pores of His skin.

See Him there, by the light of the full Passover moon. He tosses and twists, His face grinding in the dirt as He prays. Like a cluster of grapes, crushed in the winepress, He is crushed in the winepress of prayer and the blood of His heart squeezes out. Such groans and cries are beyond our comprehension, for He is praying about the Father’s Cup. F.W. Krummacher explains what was in that Cup:

In the cup was the entire curse of the inviolable law, all the horrors of conscious guilt, all the terrors of Satan’s fiercest temptations, and all the sufferings which can befall both body and soul. It contained likewise the dreadful ingredients of abandonment by God, infernal agony and a bloody death, to which the curse was attached—all to be endured while surrounded by the powers of darkness.

Do you see why Jesus wrestles in such agony in prayer, His face smeared and His robe drenched with blood? He is looking into that Cup.

Remember the profound sermon of Jonathan Edwards, who said, “God first brought him and set him at the mouth of the furnace that he might look in and stand and view its fierce and raging flames.” God did this, said Edwards, so “that he might see where he was going and might voluntarily enter into it and bear it for sinners.”

Yes, Jesus sees what He will face in just a few hours. He knows the prophetic pictures and types of the Old Testament, and He knows He was born to fulfill those prophecies. Already He can feel the heat of the flames coming closer as He sees the hot liquid sulfur in the Father’s Cup.

He sees himself becoming the burning bush, as Jonathan Edwards said, “The bush burning with fire represented the sufferings of Christ in the fire of God’s wrath. It burned and was not consumed; so Christ, though he suffered extremely, yet perished not but overcame at last and rose from his sufferings.”

Surely He must be thinking about the words of the youngest son in the Passover meal: “Father, why is it that on all other nights we eat meat roasted, stewed or boiled, but on this night, why only ROASTED meat?” Only God would know the full extent of this answer, for He was to become the Lamb of God—not stewed or boiled—but ROASTED over the flames of wrath.

Now, as Jesus prays in the garden, Scriptures reel through His mind. He knows that “in the hand of the Lord is a cup full of foaming wine” (Ps. 75:8). The Lord calls it “the cup that made you stagger… the goblet of my wrath” (Is. 51:22).6 “This Old Testament imagery will have been well known to Jesus,” says John Stott.

Jesus knew full well that God had told Jeremiah, “Take from my hand this cup, filled with the wine of my wrath, and make all the nations to whom I send you drink it. When they drink it, they will stagger and go mad” (Jer. 25:15-16).

Philip Ryken, in his commentary on this passage in Jeremiah, tells about a time when he was twelve. Suddenly, the boy from across the street, careened into his front yard and plunged toward the sprinkler. The boy was dazed, unsteady, and his eyes were glazed with drunkenness. He had just downed sixteen shots of whiskey, and his friend was frantically pushing him toward the sprinkler, hoping to revive him.

The boy fell to the ground “like a stone, flat on his face.” His mother ran out to save him, as he lay face down in his own vomit. That’s what Jeremiah was describing. It was a Cup of staggering and madness. Ryken then asks:

Why was this Cup so bitter? Above all, because it was filled with the wine of God’s wrath. The term “wrath” in Greek is org?, which speaks of God’s holy anger against sin. Matthew Henry explains that “God’s wrath is a consuming fire.”9 Indeed, this Cup, filled with God’s wrath, is “the PUNISHMENT that brought us peace” (Is. 53:4-5).

This is the same Cup which sinners who reject Christ will drink in the presence of the Lamb: “If anyone worships the beast… he, too, will drink of the wine of God’s fury, which has been poured full strength into the CUP OF HIS WRATH. He will be tormented with burning sulfur in the presence of the holy angels and of the Lamb. And the smoke of their torment rises for ever and ever” (Rev. 14:10-11).

Do you know why Jesus will drink this Cup? Primarily so that sin can be annihilated in Him. But there is another reason. It’s a blessing beyond description…Will You Drink My Cup?

Now, as Jesus wrestles in prayer in the garden, it’s as though the Father is saying once again, “Son, are you willing to drink my Cup?”

You see, long before the creation of the world, in the great Covenant of Redemption in the Triune Godhead, this same question faced the Son. There in the Councils of God, the Father showed His Son what He would endure if He lays aside His glory and comes to earth in human flesh. He showed Him the pain, the blood, the agony of the Cross, but then He showed Him the Cup of wrath He would have to drink.

In that tender moment in the Godhead, as the Holy Spirit wept and the Father trembled with emotion, God the Son humbly agreed to drink the Cup of wrath. But now, here in the garden, He gazes again into this Cup. It’s as though the Father gives His Son one more chance to back out.

I can imagine the Father saying, “My Beloved Son, will you drink the Cup?”

Now as Jesus wrestles with this question, He looks again into those raging flames. I believe that what He sees must have taken His breath away. He sees someone… a person… He sees you!

He longs for you to be His bride, but there’s only one way… He must stand in your place and take your punishment for sin. He must drink the Cup which you deserve to drink.

Did you know He loves you so much? You may feel unlovable, like no one cares, but don’t you see how much He loves you? He would rather suffer your punishment than live eternally without you. Won’t you let that soak into your heart? Please don’t reject His love. Don’t wound His heart again. Let His love flow in as you look into the Cup He drank for you…

God told Moses, “The fire must be kept burning on the altar continually” (Lev. 6:13), but when the lamb ceased to be placed on the altar, the fire burned out. In the same way, when the Lamb is not central in the Church, the fire begins to smoke and eventually burn out.

283 page book with a powerful sermon by Jonathan Edwards on “Christ’s Agony” in the Appendix. This is the sermon that changed Dr. Sandy’s life. 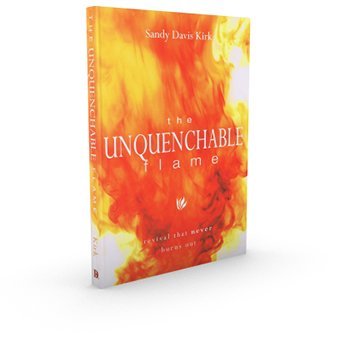